Human-computer interaction problem in learning: could the key be hidden somewhere between social interaction and development of tools?* 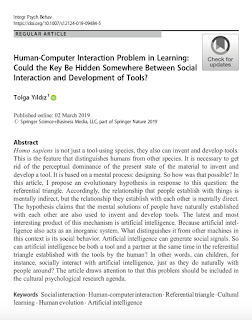 Abstract
Homo sapiens is not just a tool-using species, they also can invent and develop tools. This is the feature that distinguishes humans from other species. It is necessary to get rid of the perceptual dominance of the present state of the material to invent and develop a tool. It is based on a mental process: designing. So how was that possible? In this article, I propose an evolutionary hypothesis in response to this question: the referential triangle. Accordingly, the relationship that people establish with things is mentally indirect, but the relationship they establish with each other is mentally direct. The hypothesis claims that the mental solutions of people have naturally established with each other are also used to invent and develop tools. The latest and most interesting product of this mechanism is artificial intelligence. Because artificial intelligence also acts as an inorganic system. What distinguishes it from other machines in this context is its social behavior. Artificial intelligence can generate social signals. So can artificial intelligence be both a tool and a partner at the same time in the referential triangle established with the tools by the human? In other words, can children, for instance, socially interact with artificial intelligence, just as they do naturally with people around? The article draws attention to that this problem should be included in the cultural psychological research agenda.
Keywords: Social interaction, Human-computer interaction, Referential triangle, Cultural learning, Human evolution, Artificial intelligence

Popular posts from this blog 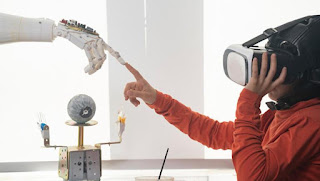 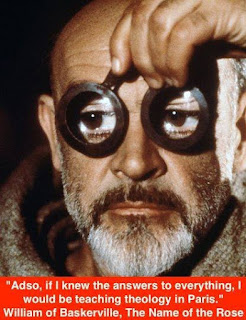