Showing posts from 2020
Show all

The most effective element in conceptualization is social interaction, not source or modality: a new model of the conceptual development in children* 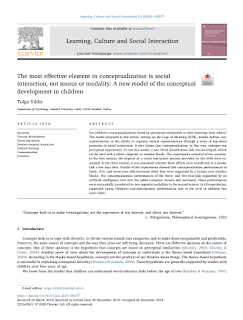 Abstract Are children's conceptualizations based on perceptual similarities or their learnings from others? The model proposed in this article, Setting up the Cage of Meaning (SCM), mainly defines conceptualization as the ability to organize mental representations through a series of top-down processes in social interaction. It also claims that conceptualization, in this way, reshapes our perceptual experiences. To test this model, a new block classification task was developed, which can be used with a tablet computer or wooden blocks. The experiments consisted of two sessions. In the first session, the impacts of a social interaction process provided by the SCM were examined; in the other session, it was examined whether these effects were transferred to a similar task a few days later. Results of the experiments showed that conceptualization performances of three-, five- and seven-year-olds increased when they were supported by a human over wooden blocks. The conceptualization
Post a Comment
Cont./Dev. »
More posts